This page may be slow to load due to the many videos. Please be patient. Also, make sure to subscribe to my YouTube channel www.YouTube.com/EvaHakanssonRacing.

Ride along with Eva Hakansson and KillaJoule in 360 degrees – at 236 mph (380 km/h) at the Lake Gairdner Salt Flats in Australia. Drag with the mouse to look around at the full 360 degree video if you are on a laptop or desktop. If you watch it in the app, tilt your tablet or phone to look around, or drag it with your finger.

1:20 minutes. The awesome video footage is thanks to Lou Fischer/BonnevilleStories.com, Gerry Jenkinson/Vindeo.co.uk, and Brian Leckey/ContentCanning.com. Edited by BMW Motorrad.

The entire story of the KillaJoule and the Green Envy covered in 18 minutes. University of Auckland, New Zealand, September 2020. Enjoy! 😀

University of Denver: “New Goal for the Fastest Woman on Earth”

Very nice interview by University of Denver, my old employer. The awesome video footage is thanks to Lou Fischer/BonnevilleStories.com, Gerry Jenkinson/Vindeo.co.uk, and Brian Leckey/ContentCanning.com.

Nicely compiled video by the Guinness Book of World Records. KillaJoule is the world’s “fastest streamlined 3-wheeled electric motorcycle”. The awesome video footage is thanks to Lou Fischer/BonnevilleStories.com, Gerry Jenkinson/Vindeo.co.uk, and Brian Leckey/ContentCanning.com.

I am delighted to have been included in the 2015-2016 Johnnie Walker “Joy will take you further” global advertisement campaign. I get my greatest satisfaction from building things that has never been built before, and the joy of it is really my main driving force.

The printed advertisement in the Johnnie Walker campaign (TV commercials no longer available): 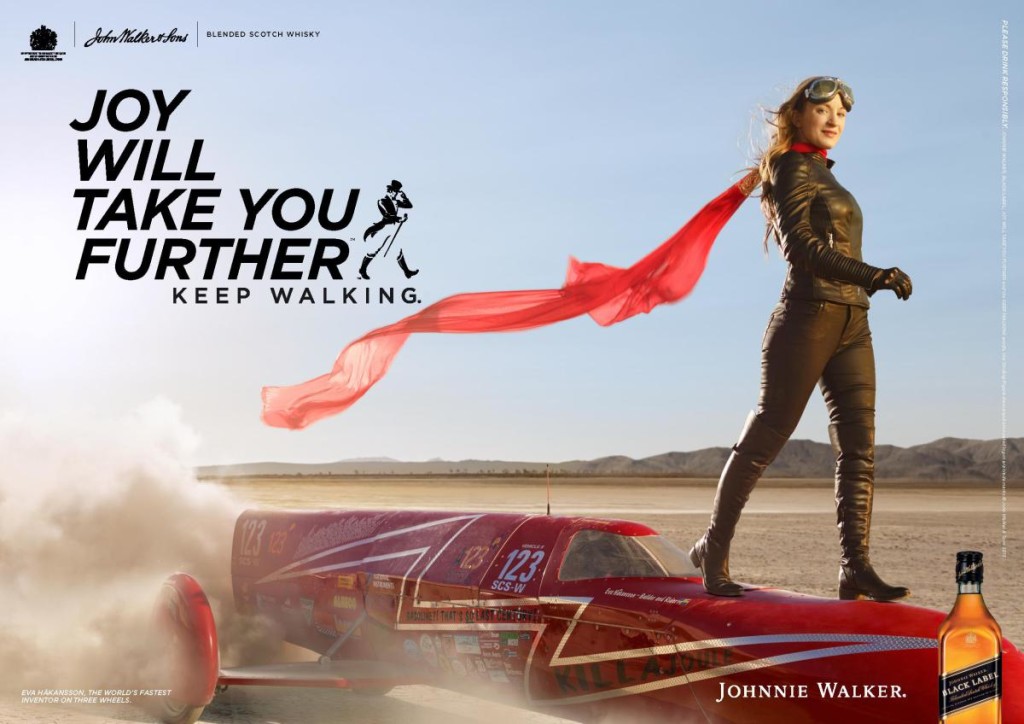 Very nice video by Gerry Jenkinson showing the 270 mph (434 km/h) run in September 2014 as well as background footage, other competitors and the history of electric racing. Well worth 5 minutes of your time!

Ever wondered how it is to drive the “KillaJoule” – the world’s fastest electric motorcycle and the world’s fastest sidecar motorcycle? Well, it is surprisingly uneventful.
Take a peek into the cockpit of KillaJoule where Eva Hakansson is driving it at 224 mph (360 km/h). Make sure to not miss the following “action moments”:

01:03 – Eva is closing the visor on her helmet
01:26 – the bike is on the track and Eva’s is pegging the throttle.
02:33 – entering the measured mile at over 220 mph
02:49 – finishing the measured mile and deploying the brake chute
03:54 – talking to the crew on the radio
04:53 – switching over to a handheld radio using another channel that doesn’t go through the repeater in the trailer 10 miles away (Eva can’t reach the built-in radio in the bike to change the channel when she is seated, so bringing another radio was a quick solution).
05:30 – stopping on the return road between the two tracks.
Trying to get the canopy off without scratching the paint (if she just threw the canopy on the ground not worrying about the paint, it would take her less than 10 seconds to exit).
The fire crew comes by to check that everything is OK.

The video is a few years old, but Eva’s spirit is still the same.

We had nothing to do with the production of this news clip, but the animation is scary accurate! If you watch the in-cockpit video above, you will see that even my gloves have the correct color.
(Upper version in English, lower in French)

Eva on ElectroCat racing the KillaCycle (2009)

Eva on ElectroCat in the left lane and the KillaCycle electric dragbike in the right lane. KillaCycle is setting a new record at 7.86 seconds @ 169 mph, while Eva appears to be almost standing still. However, Eva is doing almost 60 mph, illustrating how insanely fast the KillaCycle is (0-60 mph in less than one second!)…

Timelapse: At the KillaJoule headquarters (a.k.a. Eva and Bill’s garage) (2015)

After 2 months in a sea container coming back from the educational tour in New Zealand in December 2014, KillaJoule is in desperate need of some TLC. The humidity in the container combined with the residual salt from Bonneville hiding in every crevice, makes everything that can rust do so. Bill had to drill out one of the _stainless_ steel screws holding on the lower tail skin. Imagine of the screws were not stainless, we would have been drilling them all out…

Timelapse of the installation of the brand new 350 lb (160 kg), 400+ horsepower A123Systems battery that we used during the 2013 racing season, before updating to even more powerful technology in 2014.

Eva shows how “easy” it is to build a 400+ horsepower battery pack for the KillaJoule (that is being installed in the timelapse video above). Only 23 more modules left to be built… (Actual time ~1 hr). Published July 25, 2013.

In this 12 minute interview, filmed at the BUB Motorcycle Speed Trials 2013 by Lou Fischer, Bill and Eva tell their story of the love of everything electric – as Eva likes to say “Gasoline is sooooooo last century!”

Bill and Eva are having fun and setting speed records everywhere they go. Their KillaJoule, though still in the early days of development, continues to innovate and break speed records.

Eva Hakansson and Husband Bill explain “KillaJoule”, their electric motorcycle sidecar streamliner which they have brought to Bonneville hoping to improve on the previous year’s first run of 212mph. They intend to run again in 2014 and almost certainly will become the fastest sidecar and the fastest female motorcyclist in the world. Drayson Racing describe their new electric car. BUB 7’s crew and Rocky Robinson (Ack Attack 396mph) come over to talk motorcycles, while others wait on the beach! As Lincoln Steffens said: “I have seen the future and it works”. Eva says “Gasoline is so last Century”.

Older videos and more KillaCycle dragracing videos can be found on our archived YouTube channel www.youtube.com/killacycle . Newest videos are posted on www.youtube.com/EvaHakanssonRacing.

Did you find a mistake on this website? Or information that is outdated? Please let me know! It is hard work to keep websites updated, and I appreciate if you tell me when something doesn’t look right. Thank you! // Eva