How does it feel setting a record? 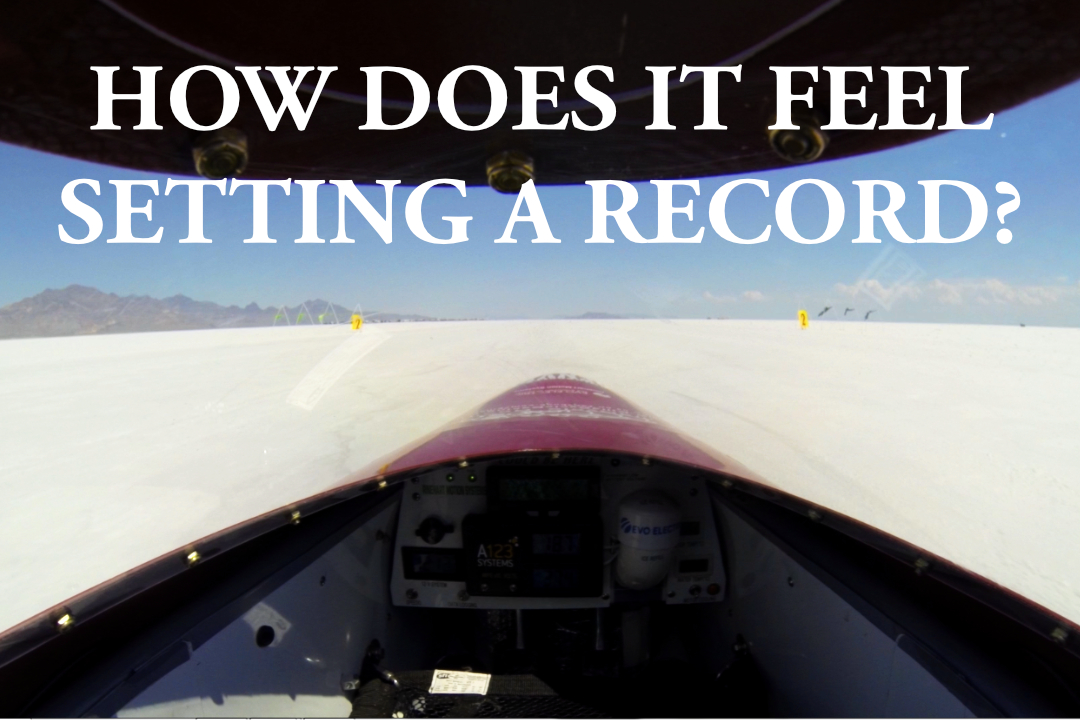 “How does it feel running for a speed record?” That the second most common question I receive. The most common is “How fast is it?”. The speed question is easy to answer, the other question is much more difficult.

The drive itself is really short, just a few minutes, but can be quite an experience. Driving the KillaJoule is really easy, pretty much anyone could do it (provided that you are maximum 158 cm/5 ft 2 in 😉 ). You look towards the end of the track, twist the throttle and try to stay approximately in the middle. When you pass the finishing line, you roll off the throttle and push the brake chute button. You slow down over about a mile or two, and when you reach one of prepared access roads you turn off the track. That’s it. It is the easiest part of my “job” (it isn’t a regular “job”, I am paying for this myself). But that said, it certainly isn’t free from emotions. 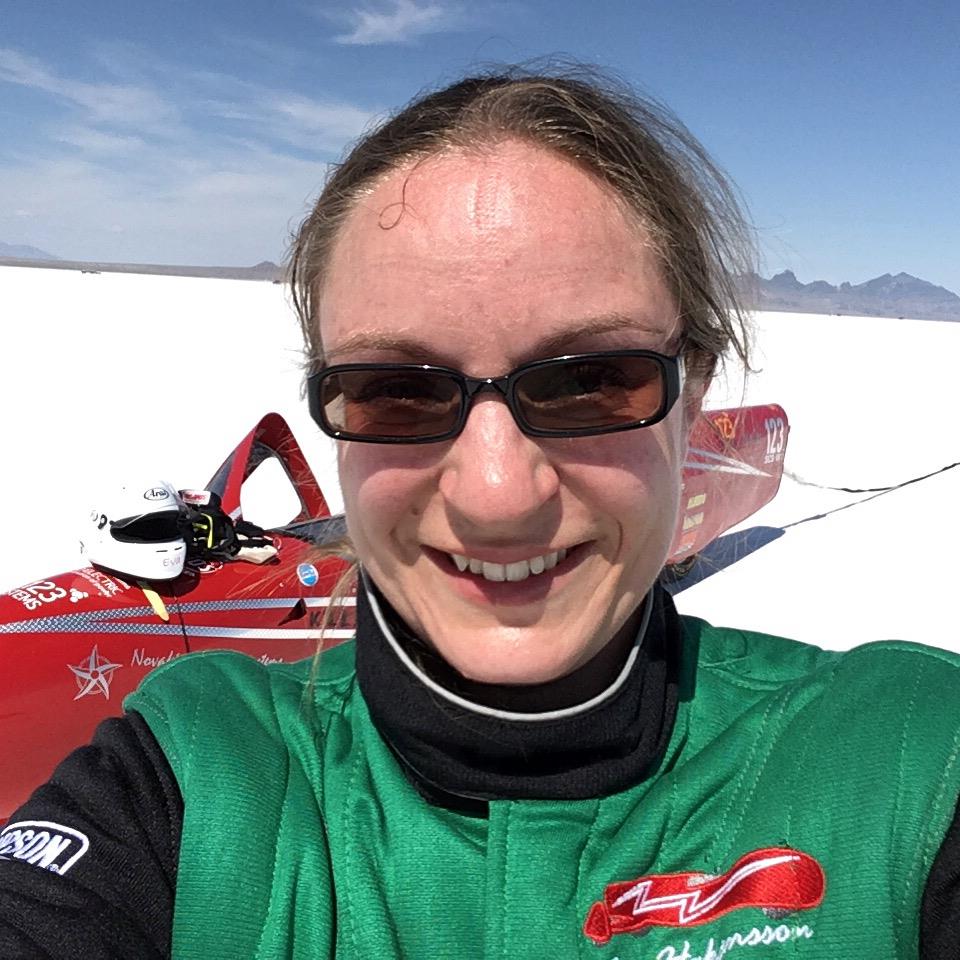 I am not an adrenaline junky, actually quite the opposite. While it is definitely an experience of a lifetime, and a very privileged position, I find the record attempt runs very stressful and at times outright scary. It is quite claustrophobic and uncomfortable. I am strapped in and can’t move. The pressure to set a records is enormous, and the world is watching. When we get to the starting line, I sometimes just want to run away and go home. Or take a nap because I am exhausted from actually getting everything done on time. But to quote famous singer-songwriter Dolly Parton: My desire to do it was always greater than my fear! 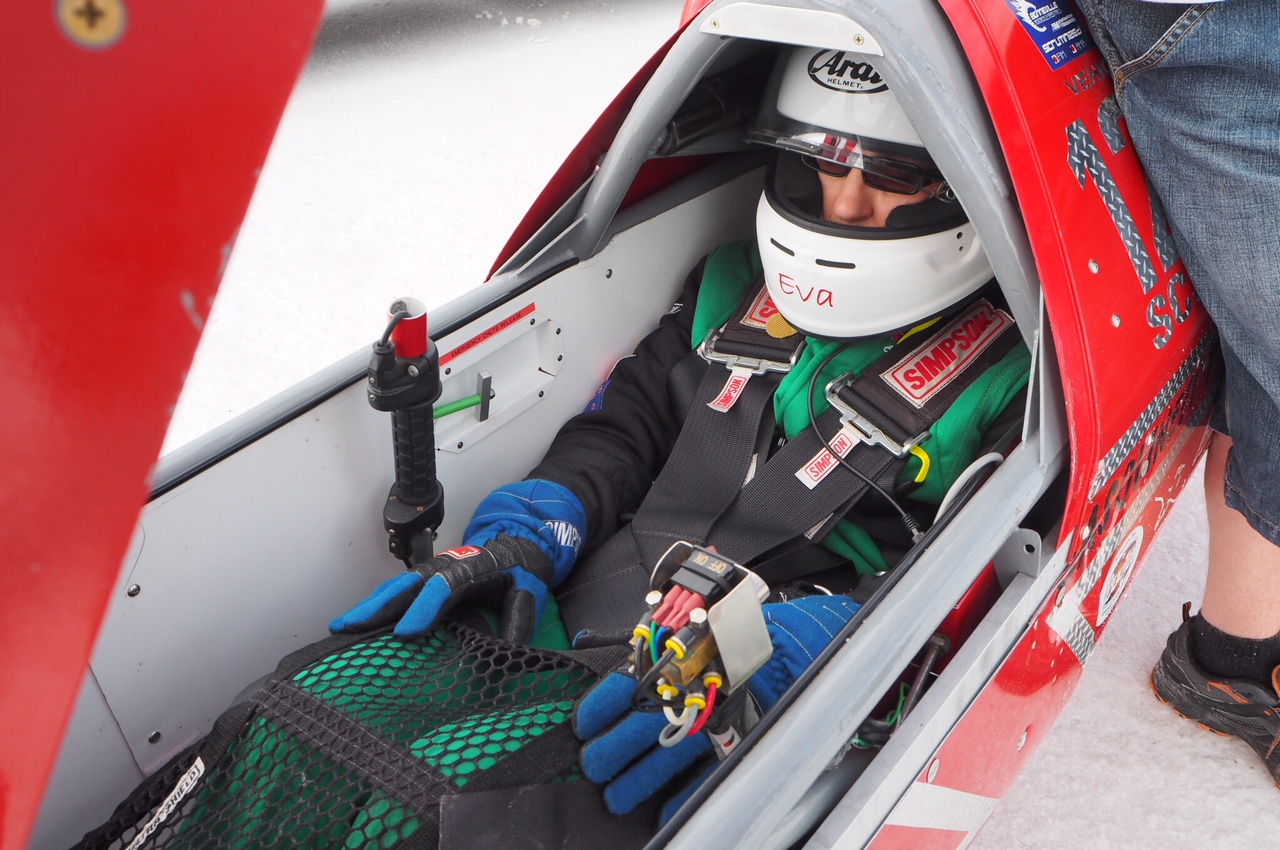 Ready to go! Land speed racing at public events includes a huge amount of waiting. And waiting. And waiting. With 200 people sharing the same track, it takes a long time before it is your turn. I won’t get into the vehicle until it is close to my turn, but there is almost always additional waiting. 15-30 minutes wait in the vehicle with 100 degrees F (38 degrees C) ambient temperature is not unusual…

What about the actual record run? Those two minutes when the track is all yours? I wish I could say that it is an awesome big rush that you will live on for years, but it isn’t really. The closest I can describe it as a 2 minute long mix of horror, boredom, and magic. Setting a new record means that I am going faster than I ever have gone before, and that the bike is going faster than it ever has. Accelerating up to a speed where I have been before is typically so uneventful that it is almost boring, but as soon as you surpass that speed you are entering uncharted territory. It is known that stability problems can occur very suddenly, so it is quite nerve-wrecking. The vehicle is also extremely tight and claustrophobic. To be honest, that alone took a while to get used to. The relentless desert sun beating down doesn’t make it any more pleasant. But, at the same time, the feeling when everything works flawlessly is like magic. Years of work finally pays off, and it is like time stops. When I have finished a run, all my nervousness and discomfort quickly vanishes and is replaced by a huge grin. I say, “Well, that was easy, let’s do it again”.

Behind the scenes at Bonneville

Bonneville Salt Flats is 666 (!) miles (~1100 km) from Denver, Colorado, USA, where Bill and I lived before we moved to New Zealand. It takes 12 hours door to door hauling our 30 ft (10 m) racing trailer. Here are a few images from our record attempts at Bonneville Salt Flats over the recent years. 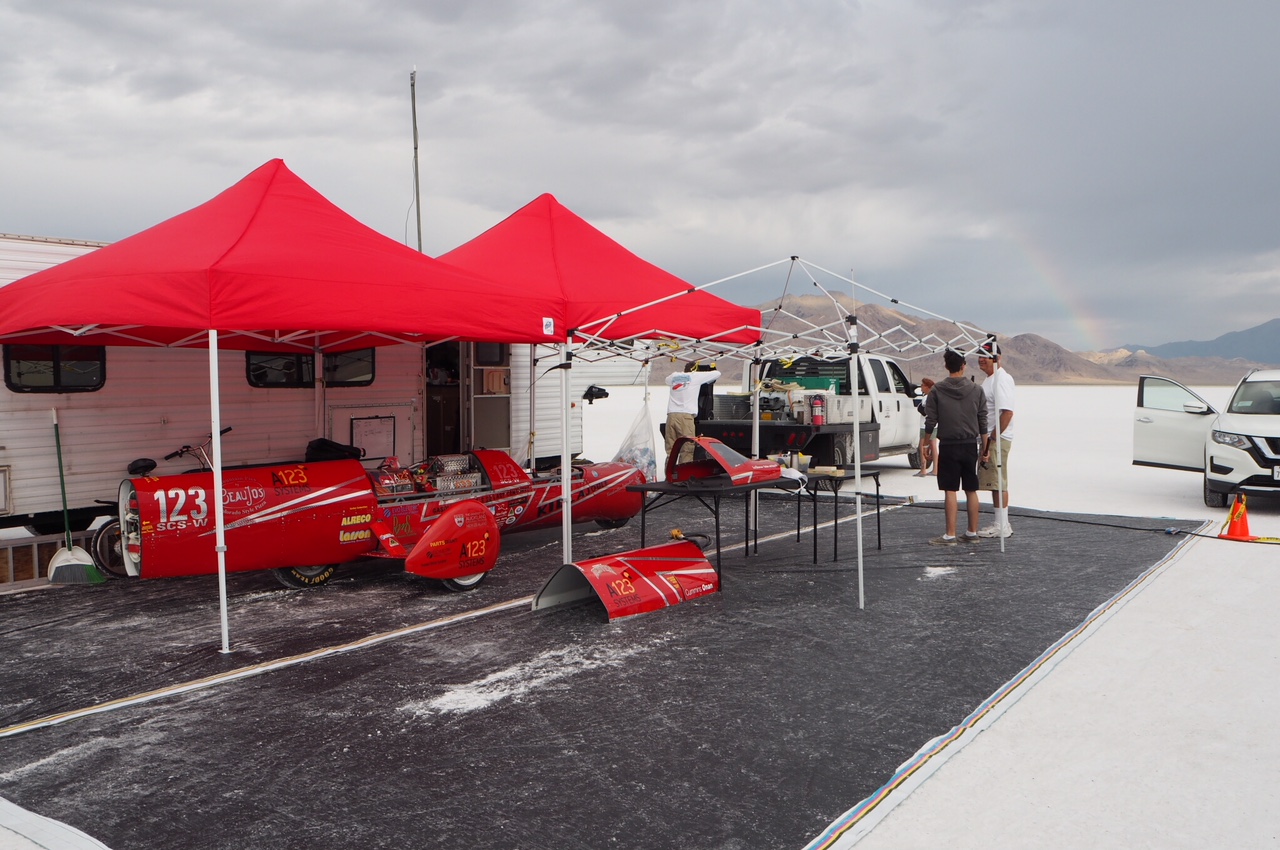 Our pits at the Bonneville Salt Flats. If you didn’t bring it, you won’t have it. The organizers provide the track, timing, ambulance, portable toilets, and a hot dog stand. You have to take care of everything else. 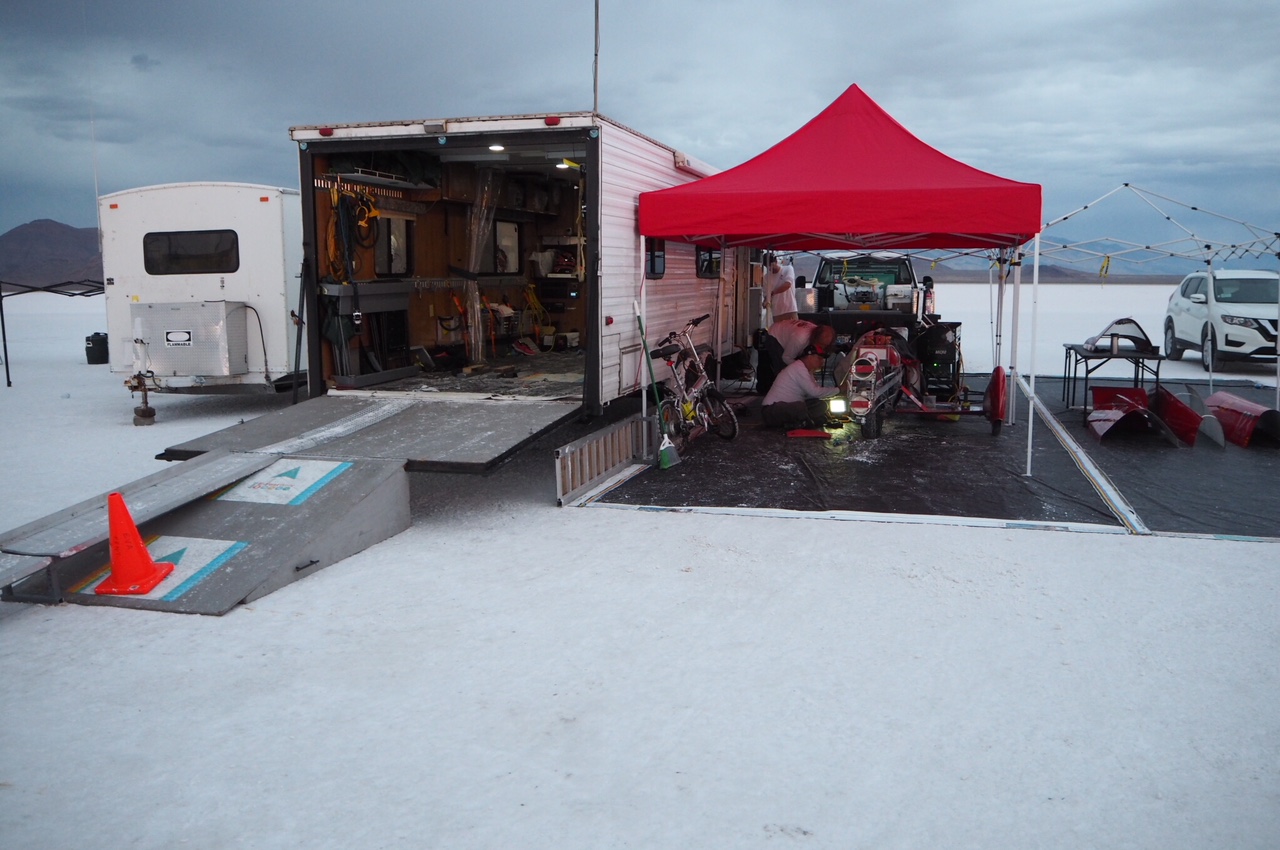 Our pits at Bonneville Salt Flats. 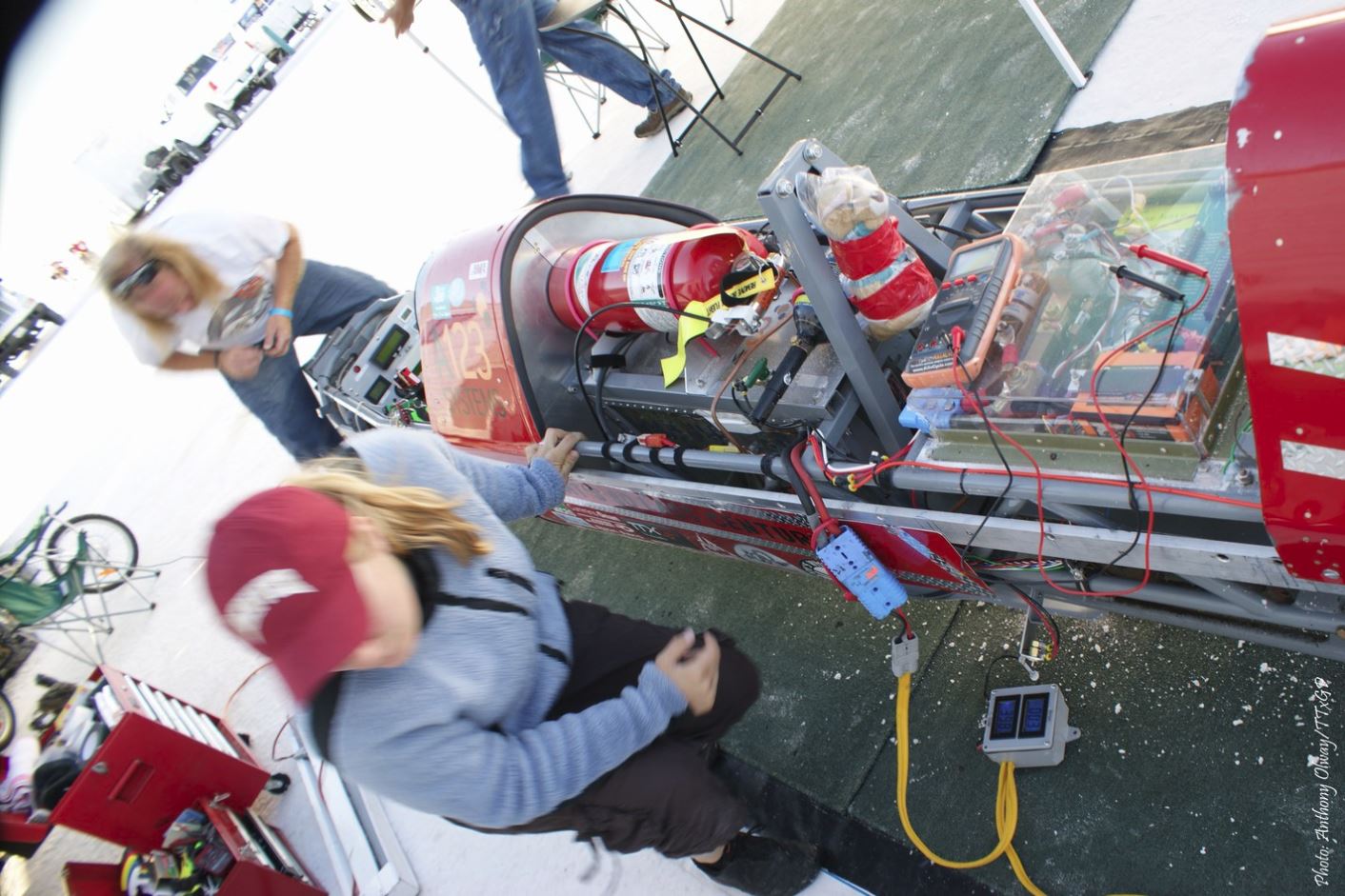 Busty getting ready for a run. This was one of our earlier years, probably 2011. 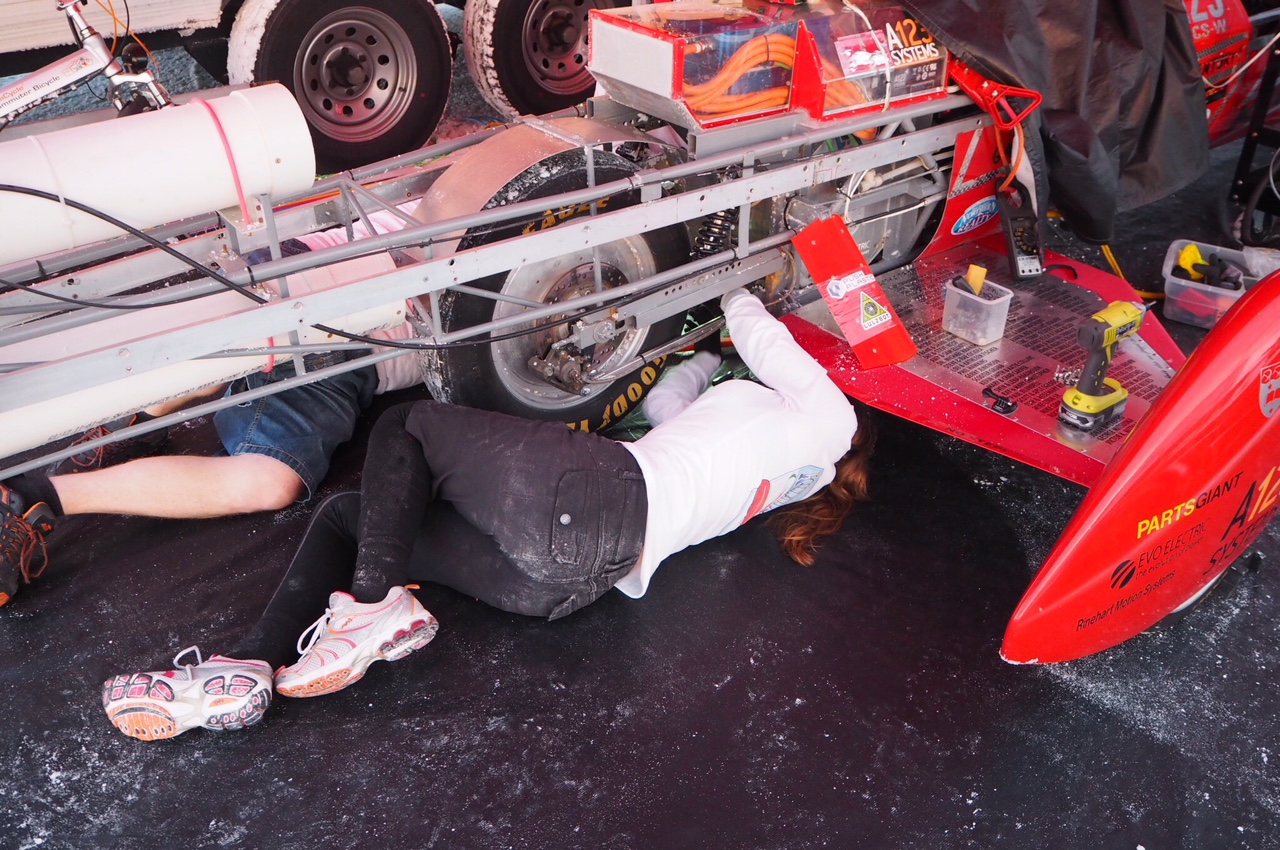 Typical position where you will find me – working on something on the bike that broke, or needs improvement. 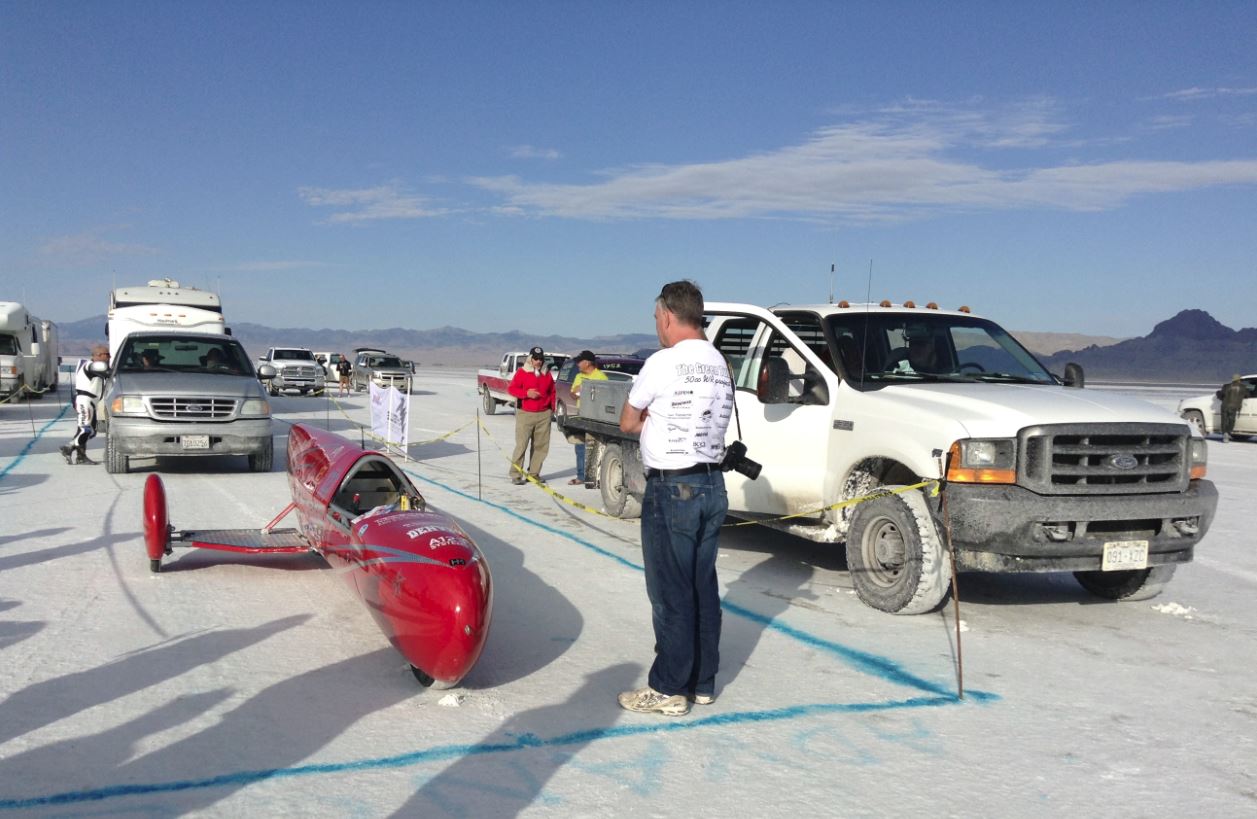 The saying at Bonneville is “Hurry up and wait”. With 200 or so people sharing the same track, it is a lot of waiting. 2017 was particularly awful where we waited on average 4 hours in line for each run. Some of the electronics (the DC-DC converter to be exact, not the battery) overheated from the 100 degree F (38 degree C) ambient temperature, which gave us a lot of grief all week long. We didn’t set a new record in 2017, and the long wait in the hot sun was the root cause. 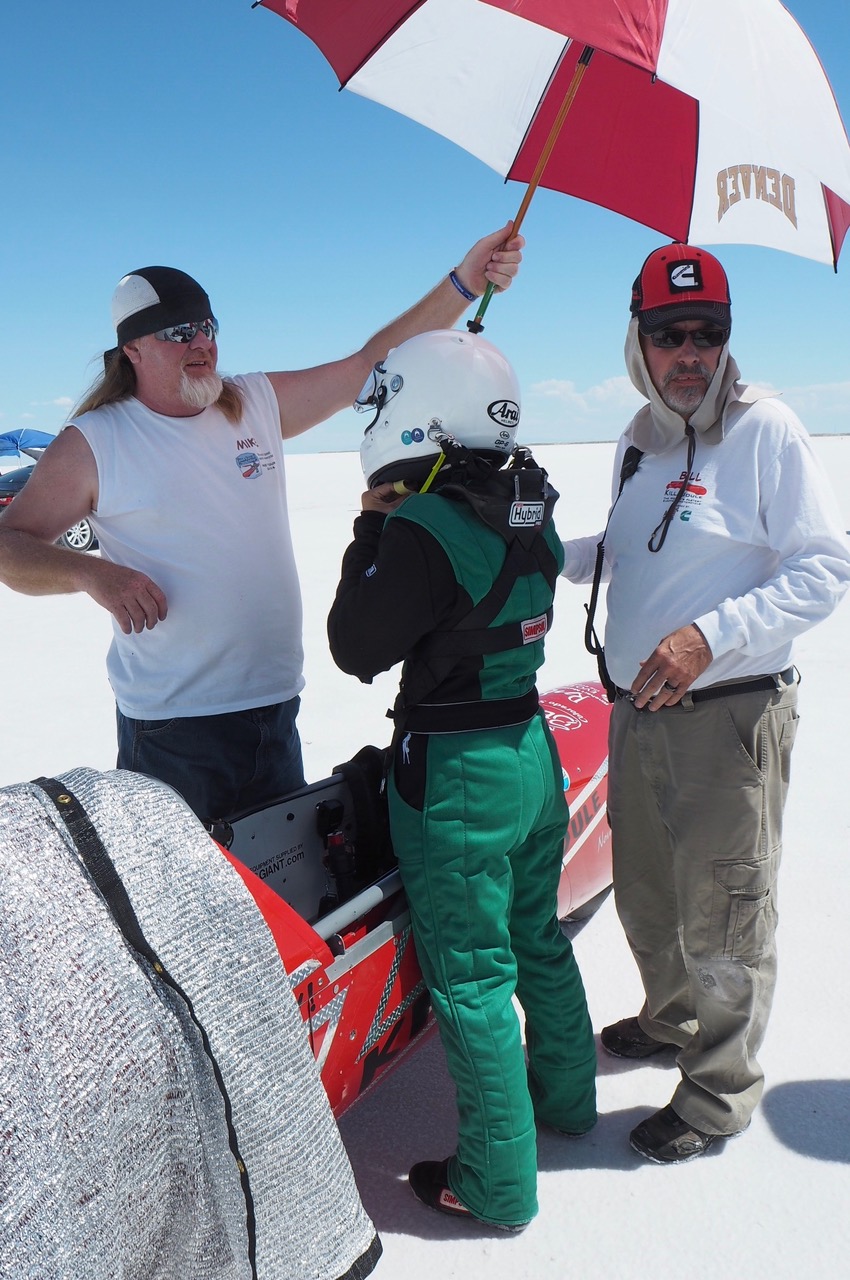 Getting dressed up and ready is quite a procedure. It takes me about 15 minutes to get ready and buckled in. When you are in line with other people, that takes some skillful timing. You want to be ready exactly when it is your turn. If you are ready too early, you have to wait and cook inside the suit. If you are ready too late, other people get made and you may miss your slot and have to wait for several more hours. 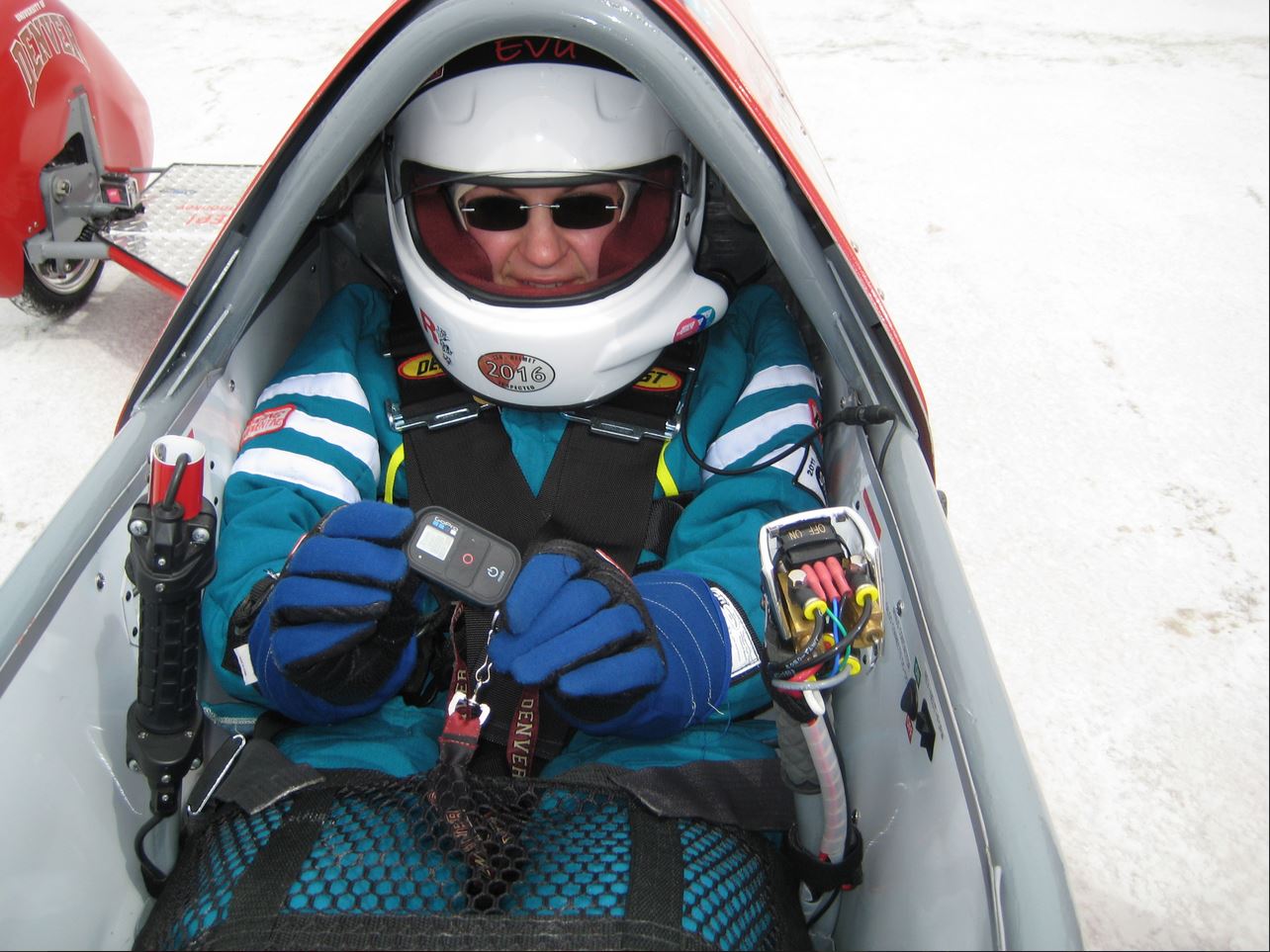 If it isn’t on video, it didn’t happen! With a minimal crew at the track (I simply can’t afford the room and board for more than three people in addition to Bill and myself), I have to take care of the video myself. I simply got tired of the crew forgetting to turn on the cameras, and they got tired of me yelling at them. I have two remote controlled GoPro cameras: one in the driver’s compartment and one on the outside. In addition to running through the procedure to start the bike, that includes about 10 different switches that have to be turned on in the correct order, I also start the cameras. 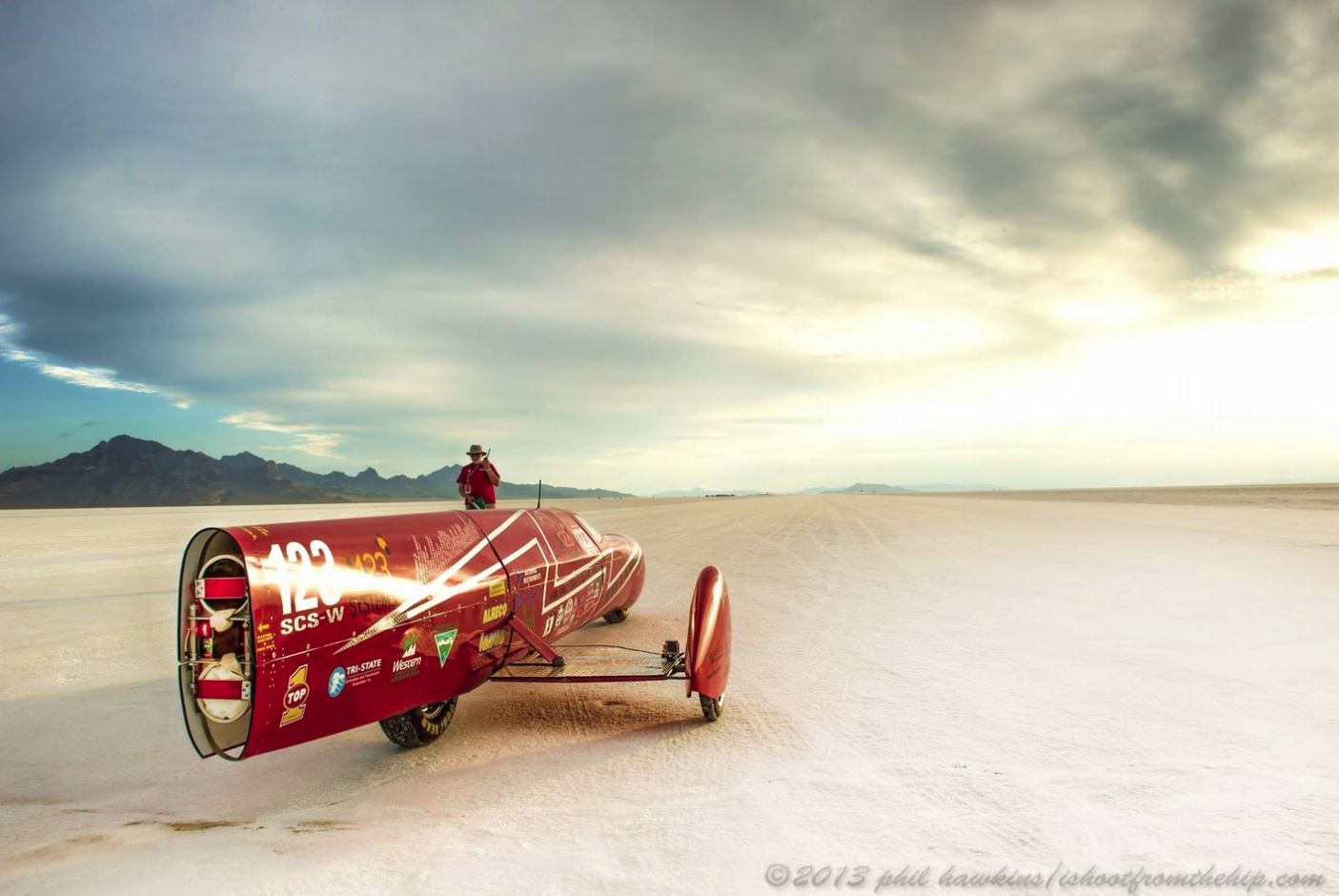 The course is yours! Photo by Phil Hawkins (permission required for re-use or print of this photo!) 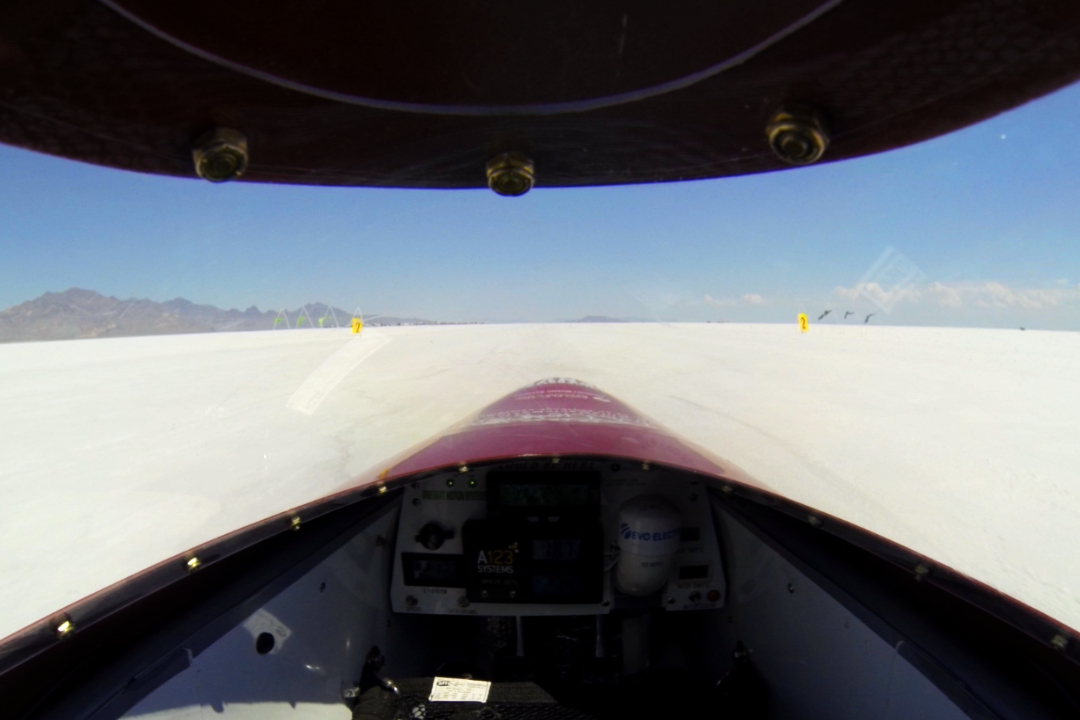 The view from my office! 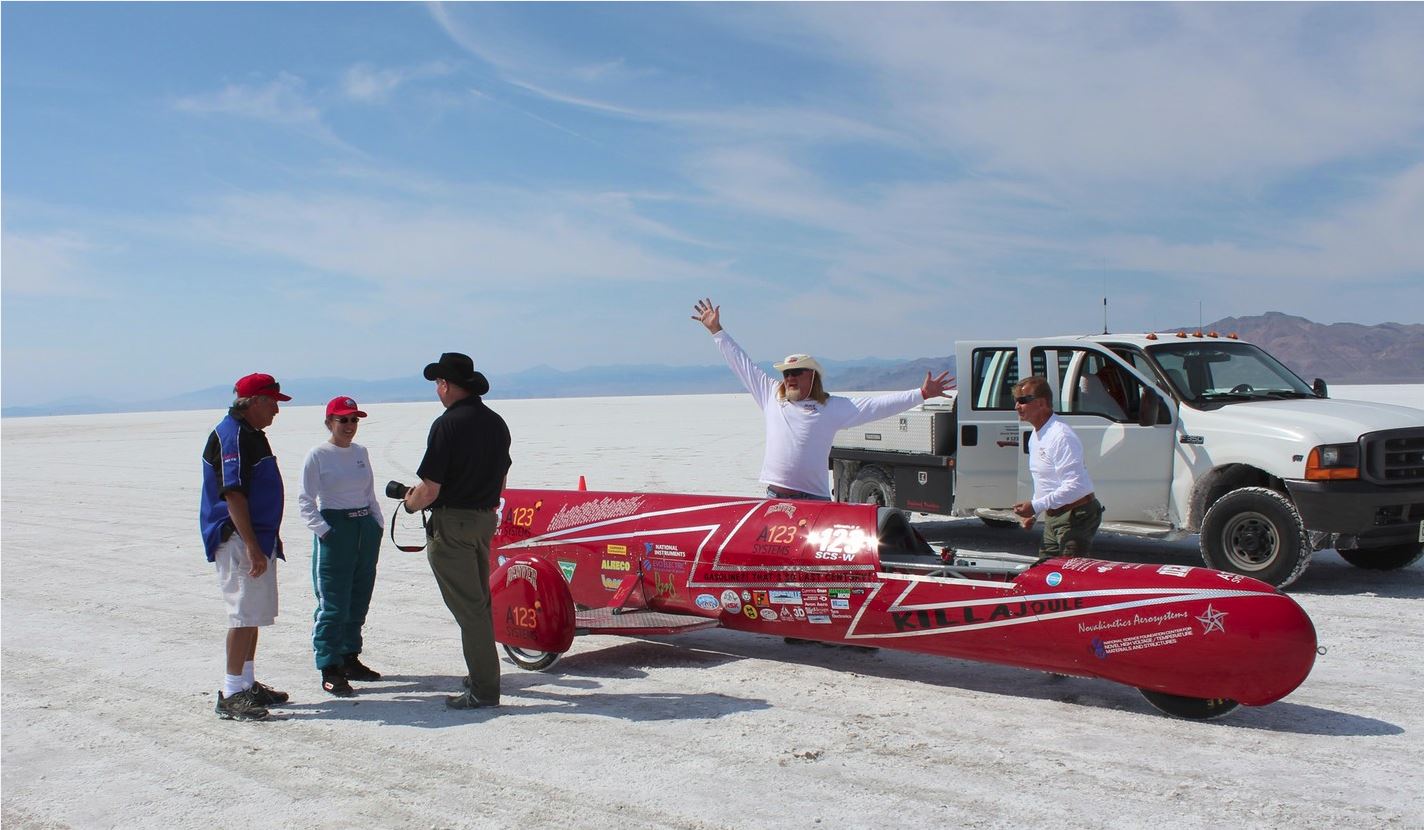 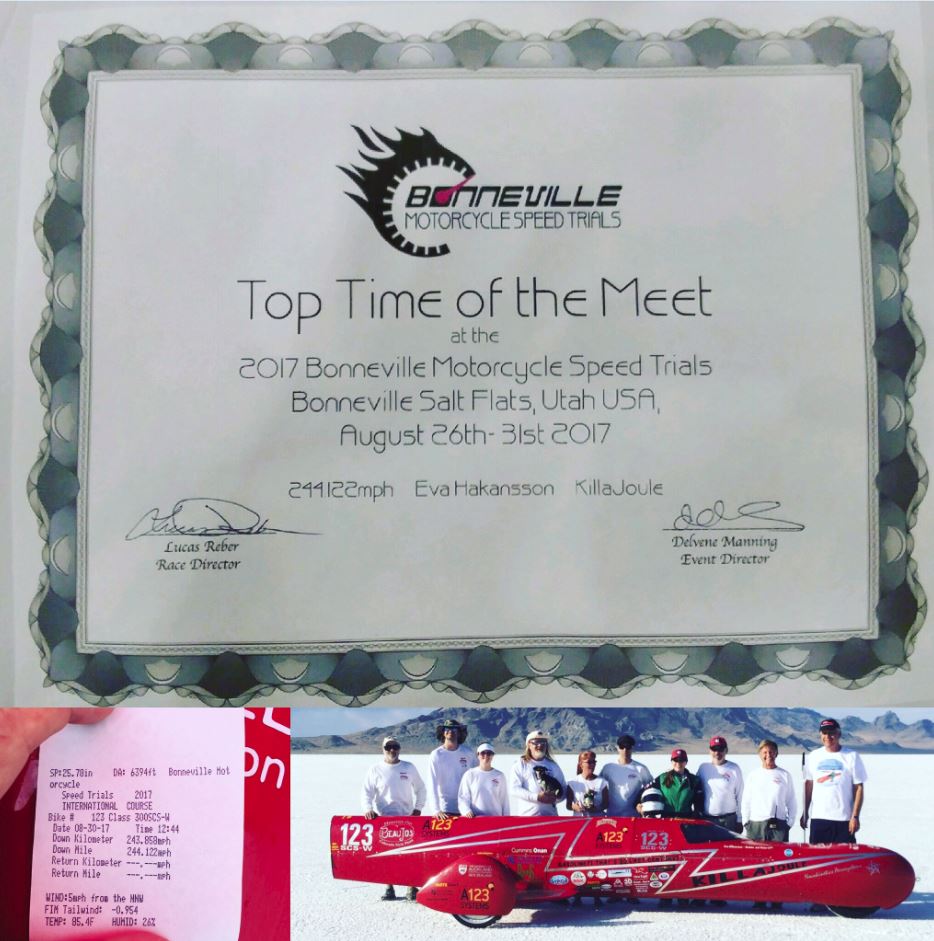 We didn’t set a new record in 2017, but we did still run the fastest speed amount the ~200 motorcycles that participated in the event.

New Australian record! End of an era. Start of a new era.